As I may have said Morar bay is one of my favorite places. and it has the ability to express different moods and textures that is quite serine. Like the entry below this shot was taken at high tide, though at this point and the vast expanse of the silver sands were covered by about two foot of water; so the wavelets were not running across the long shallows – so no geometry to play with.

Again this image was taken about 45 minutes after the sun had set, but I wanted different aspects had to come into play. The other Morar sunset shots were taken with a modern Sigma 10-20 zoom. This lens lends itself to a gives a punchy saturated look without much intervention in the post processing department. The look I was after here was much less dramatic, more gentle look that leans more to a 1930s watercolour. To this end I have a Tokina 20-35 zoom from the pre-digital auto-focus age which presents respectable images with a bit less punch, giving me a pallet of Prussian blues, saffron and burnt orange with similar underexposure. 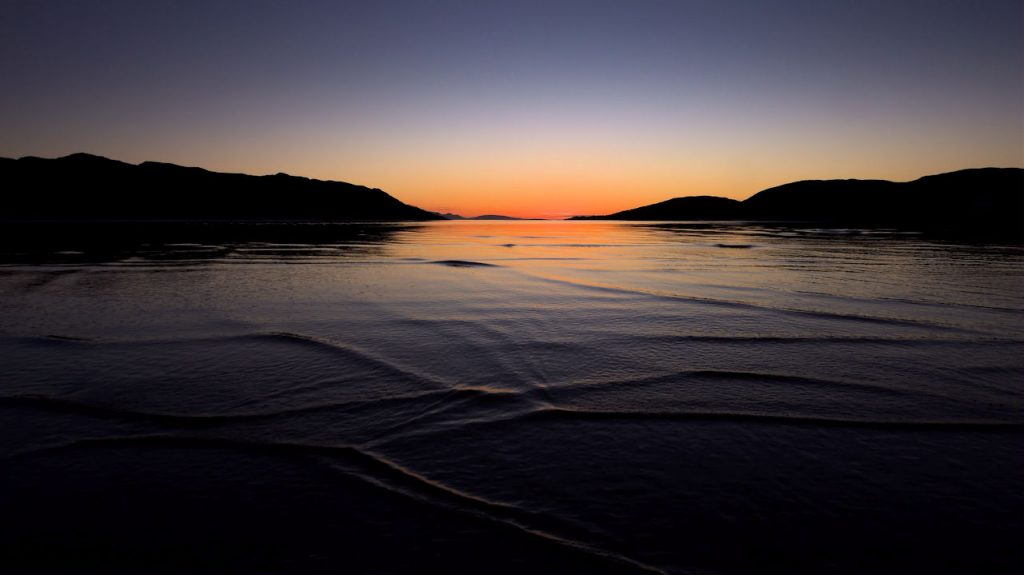 The Morar estuary is one of my favorite places. It is very well sheltered from the Atlantic that it connects to. At the time the above shot was taken it was high tide, and the vast expanse of the silver sands were covered in less than a foot of water. The sheltered nature and the shallowness of the water gave rise to the wave patterns that interceded like a flexed grid, giving additional geometry to the composition.

This image is from about 45 minutes after the sun had set, but the camera didn’t think it should look anything like this…

Digital sensors unlike film always tries to dynamically adjust for the lack of light. Back in good old transparency days you would have underexposed by about a third of a stop to get the night saturation you see above – however on digital that can become two or three full stops to get it near to what your eye and brain perceives.

Gear is a strange thing, when it comes down to it a camera is a box with a lens on front. Back in the day a Hasselblad was an average box with an exceptional lens on the front of it (all three I ever had broke in fairly short order), that is why they dominated the MF marketplace. I had better experiences out of Bronicas, Mamyas and Pentax 67s, not to mention my Yashmat 124G which I still have.

For a Pro there were two practical choices in 35mm; Nikon or Canon. Nikon had the build quality, Canon had the pro level support. I chose Nikon and I could never understand anyone wanting Canon. However, if Minolta had genuine pro support I would have gone with them, as their lenses just had something special… on the other-hand if I could have justified the outlay I would have gone all Leica, as there is something special about Leica glass.

So essentially my philosophy is it’s the lens that makes the biggest impact on your image.

When I was learning my craft I also worked in a camera retail shop, so I got to know hands on practically all of the 80’s best and worst equipment. Most importantly from this I got an understanding of how much spin goes on in the brand phantasmagoria – essentially the lesson is; new and latest hardly ever correlate with best and improved.

Technological advances have two sides; the ability to improve an entity and the ability to make it cheaper.  Sometimes this wins out in the consumers’ favour, sometimes is does not, most of the time it is swings and roundabouts. For every minutely calculated curve on an aspherical lens element ground out in precision on the now non-toxic non-radioactive glass, there is the knowledge that this will be housed in a smorgasbord of plastics rather than hand buffed brass and aluminium (unless it is a Leica of course).

This is allied to something that few folk actually realise; that it is only currently that the digital image has caught up with what is capable with film. Yes, digital is easier to master the basics in, but film is the medium of tone and real resolution.

This leaves us at another cusp, for all the advances in lens technology many digital lenses are going to struggle with new 40mp plus resolutions, where some old humble manual primes are going to really shine.
​
So where’s my money on; well yes I have a couple of cutting edge Sigmas, but these are dwarfed by my collection of the old, the odd and the unusual, which if I get the luxury of planning a shot, I invariably select one to use.